Sunday was the major event of the Peel District Cycling Club calendar, the Peel Classic. This year returning to the Jarrahdale circuit last use, almost 20 years ago. Starting in Jarrahdale with a fast 6 kilometre descent, before turning on to the South West Highway for a windswept bumpy 10 kilometres. Before turning onto Kingsbury Drive, the 2 kilometre climb to the Monastery, the average gradient is 8%, however this does include a couple of flat sections and two pinches at over 18% making it challenging. The riders where then faced with undulating 22 kilometres, including the climb out of Serpentine Dam, before returning to Jarrahdale. D and C grade women along with D grade men raced one lap of the 42 kilometre course. A and B grade women, B and C grade men two laps. With the A grade men facing 3 laps for 137 kilometres and close to 2000 metres of climbing for the toughest race of the year,

The D and C grade women started with the D grade men and the group stayed together until they turned onto Kingsbury Drive. Under 15 riders were only permitted to race in D grade, due to the distance, however with the power to weight ratio, they had a clear advantage and it was under 15 riders Sam Washington and Finlay McRobbie who crested the climb first. chased by Callum McGillvray who suffered the misfortune of dropping his chain early on the climb. Dennise Laurence of C grade was the first women over the climb, hotly pursued by state under 15 time trial champion Chloe Dal Passo racing D grade.

Washington and McRobbie worked together to get to Jarrahdale, with Washington winning the sprint to claim first. McRobbie second. McGillvray third, another junior Jeremy Smith was fourth, with 70 year old Micheal Morton close behind.

In the women’s grades Laurence maintain her lead to claim a solo victory, with Katrina Mclennan second and Luba Kovalenko third in C grade.  Dal Passo also stayed clear of her pursuers to claim victory in D grade, with Jane Yang second and Danielle Spencer third.

C grade men, exploded the first time up Kingsbury Drive with Daryl Puyales leading the charge. By the time they reached Jarrahdale the first time, Puyales had a 30 second lead over 11 chasers, with 38 other riders spread over the course. The last lap say Puyales reeled in and at the final corner the lead group was four riders. Andre Janessen won the sprint to the line, with Caleb Kenrick second and Julian Johnson third.

B grade mens was a similar race, carnage on the first climb, 12 riders making it to Jarrahdale in the front group, more attrition on the second lap. With seven riders approaching the final corner,. Craig Denham attacked, carried speed through the final corner and held on to win by second, from Jacob Warman, with Phillip Craven third. 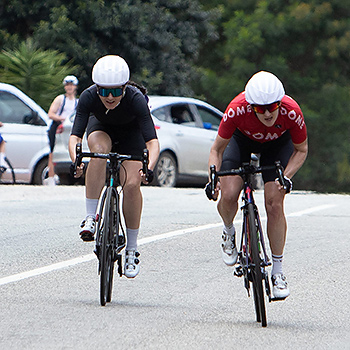 B grade women was a similar race, three riders together at the top of the climb, first lap, they worked together so nobody could chase back on, late in the second lap three became two. Approaching the line Nancy Tippaya rode away to take the win. An exhausted Megan Gammie claimed second, with Claire Tyrell taking third.

A grade women, lost a few riders on the first climb. But the bunch stayed together, until approaching Jarrahdale for the first time, Sarah Summerscales attacked and got a small lead. Amanda Nabi then bridged across to Summerscales and the pair just rode away from the others. Nabi claimed the Queen of the Mountain prize, for being the first rider over the climb to the Monastery the second time as the pair just kept increasing their lead. In the run to the line Nabi took the win, Summerscales second and Teneal Attard took the bunch sprint for third. 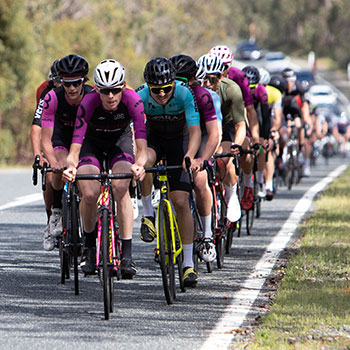 A grade men, lost a couple of riders first time up the climb, but the bunch stayed together as Patrick Saccanni-Williams and Jordan Dawson broke away on the return to Jarrahdale. The pair stayed away for another lap with Saccanni-Williams taking the King of the Mountains prize on the second climb up Kingsbury. Before being chased down before the start of the third and final lap. The bunch was together for the start of the final climb to the Monastery, when Oli Stenning attacked. A few riders managed to get to the top close to Stenning, but he kept piling on the pressure every time the road went up. In the end Stenning rode into Jarrahdale to take the win more than a minute clear of Matt Burton in second place. Who was another minute clear of the chasing bunch, which was lead home by Tim Harvey.

The Peel District Cycling Club would like to thank Fleet Cycles, Bike Place Baldivis, KD Cycles and Lakes Bikes for without their help, this event would not be possible. 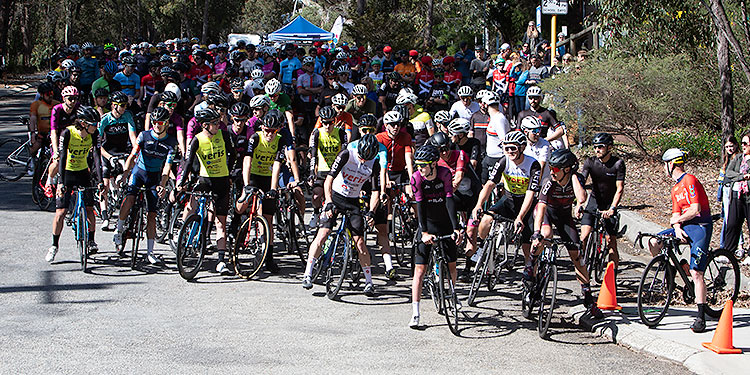