Supported by City of Rockingham

The Peel District Cycling Club Summer Criterium Series which in proudly supported by the City of Rockingham commenced at Smeaton Way in Rockingham last Sunday.

One new initiative this season is prior to racing, a free 30 minute coached skills training session for new racers, potential racers and any cyclist who wants to improve their skills. With a number of new racers this was well attended.

The Smeaton Way Circuit is notorious for the wind, usually with a headwind in the back straight and a tailwind of the finishing straight. Sunday it was reversed with the finishing straight into a brutal headwind. This caused difficulties for all grades, especially E grade with a real mix of riders form under 11s to considerably older and of varying speeds. As long as you could stay with the bunch, you could get protection from the wind. Once you let a small gap open, you would quickly lose contact with the group. .

Nine riders started E grade and after twenty five minutes, there was four riders at the front and the rest spread around the course. In the sprint to the line, Blake Brown took the win, with Kathryn Allen second and Chase Haines third.  With seperate season long competitions for male and female riders, the top three male finishers were Brown, Haines and Kit Boulton, the top three female finishers Allen, Regina Moohan and Kristeen Hapi.

A very fast start to D grade saw two distinct groups form within two laps. The front group powered by a group of friends, who only started racing the week before, rode away and promotion to  C grade. With Matthew Trewick taking the win from Austin Webb, with Kelby Smart third. The top three female finishers were Michelle Coehlo, Donna Dixon and Mackenzie Coupland.

The next “race” was the Little Critters, with young and very young riders taking to the circuit for one or two laps, under superrvision.

With 29 riders, you would expect fireworks with C grade. While it was a fast race, almost 40 kilometres an hour average, it was not an aggressive race, with only a few serious attacks and no breaks. In the bunch sprint it was Jack Dolher first, Sam Washington second and Ryan Jewell third. The top three female finishers in C grade were Dennise Laurence, Zoe Clayton and Katrina McLennan. 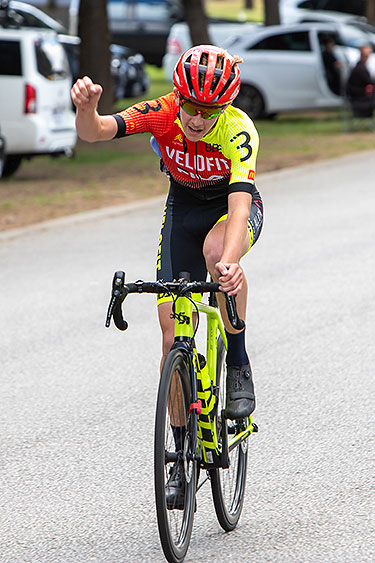 B grade saw Liam Magowan, Adam Jones and Adam Maccan establish an early break. The bunch  kept the break in sight, but they were unwilling to expend the energy to chase it down. After 15 minutes, Magowan was struggling and was dropped from the break. His team mate Mikey Hoskens then bridged across solo and  surprisingly the bunch did not react. The arrival of Hoskens increased the pace at the front and Jones dropped back to the chasers. With two laps to go the pair held a lead over the bunch. With a lap to go, Maccan had ridden away from Hoskens and Scott McDowell had launched solo out of the now chasing bunch. That was the way it finished with an exhausted Maccan taking the win, from Hosken, McDowell third.The top three female finisj\hers were Amanda Nabi, Dharlia Haines and Jessica Lawler.

The expectation from A grade, was a break would go early, the bunch would let them get a gap, then attempt to chase them down. Instead every attack was quickly chased down, it was looking like a bunch sprint. Then as the group approached the finish line for the bell to signal the final lap. Three riders started sprinting like it was the finish, as they crossed the line, two riders realising their mistake and sat up, the third JP Van Der Merwe kept going. Rounding the final bend 1.4km later Van Der Merwe still had a lead over the now disintegrating chasers. A final charge by Joe Laurendi came close, but Van Der Merwe took the win, Laurendi second and Adrian Pahl third. 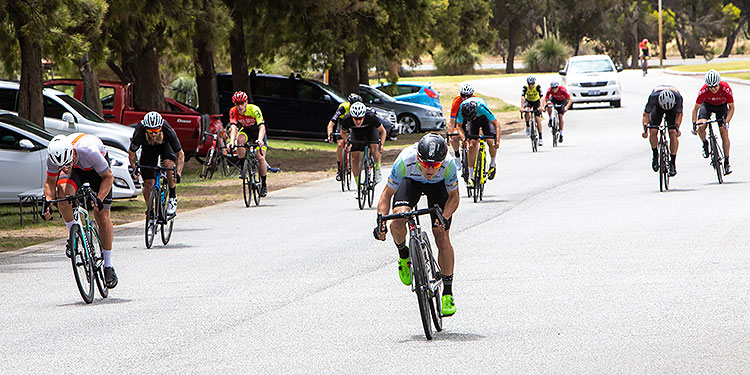