The Peel District Cycling Club raced at the Pinjarra Industrial Circuit last Sunday. With three other cycling events last Sunday, the numbers were down in A and B grade. However, C and D grade which are the grades for new rides saw similar numbers to last week in Rockingham. 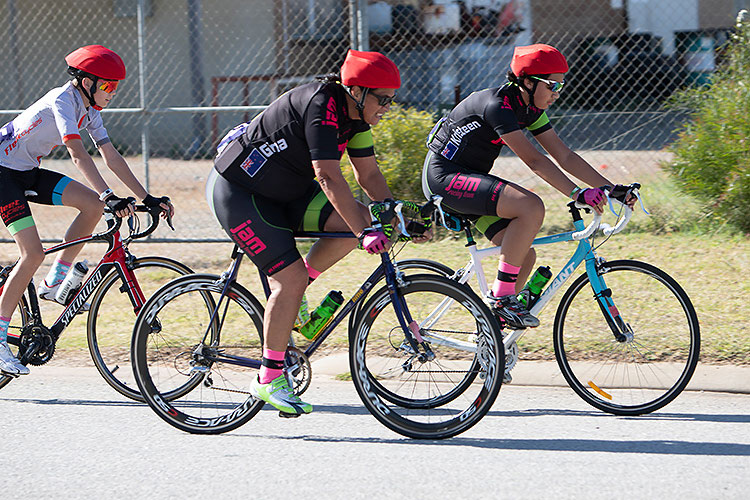 E grade is usually the grade for junior riders, with a few older riders. With families racing it is siblings, or parents chaperoning children. This season the family battle is between Regina Moohan and her grand daughter Kristeen Hapi. The bunch stayed together for 4 laps before Kit Boulton attacked and rode away. With just over two laps to go Moohan set off in pursuit. Boulton  held on to take the win. Moohan took second overall, first woman and family bragging right. In a closely fought sprint finish Xavier Corriea took third, just ahead of Hapi.

D grade, was a real mix of riders from the under 11 State Criterium and Road Race Champion to riders over 70 and a number of riders in their first or second race. The pace was fairly sedate for the first fifteen minutes. Then a prime was offered, a prime is a race within a race, the rider next crossing the line first wins a prize. With a rider quickly off the front, being chased by two more. The trio passed the line and kept going, forcing the bunch to chase. It took four laps to catch the the break and once caught, two of those riders attacked again, got caught, it was two laps to go and there were attacks, but they were all chased down. Ron McArthur round the final corner and powered to the finish to celebrate his 70th birthday with a win. Callum Campbell whose powerful sprint saw him claim the prime, was second and Micheal Williams third. The top three female finishers of Sarah Corriea, Nicole Bzdyl and Donna Dixon were not far behind.

C grade was aggressive racing from the start, every lap saw one or two different riders off the front of pack.  With a bunch always willing to chase, it was going to be a bunch sprint. Which was won by Russell Fryer, with Steven Dean second and Ryan Jewell third. The top female finishers were Jo Boulton and Dennise Laurence.

There was only 8 riders in B grade, it was the smallest field for some years, but it was also the most experienced/talented with more than half the field having race A grade in the past.  The race quickly fell into a pattern. Steve Knight a skilled time trialist would attack, get a gap and the bunch  would slowly chase him back over a few laps. When Knight was caught, another rider would quickly counter attack, Knight would struggle, getting dropped at least twice, but each time after the attacker was caught, Knight would get back on the bunch and then attack. The bunch stayed together and on the final lap Scott McDowell attacked down the back straight, got a gap and kept it to the finish to claim the win. Adam Jones was second and Craig Raynes third. With Dharlia Haines the top female finisher.

With only 6 A grade riders,  4 B grade riders with A grade experience were convinced to join in.  This result was the A grade riders attacking, constant changing the pace and slowly the B grade riders were dropped with the one exception of Scott McDowell, who survived until the end of the race and earned himself a promotion to A grade.  There was seven riders on the final lap and it was a race into the final corner. Micheal Vreeken lead into the corner, but went in too hot and had to take evasive action. Behind Vreeken it was Adrian Pahl, Wade Longworth and Callum Milne and that was the order they stayed until the finish. With Pahl taking the win. 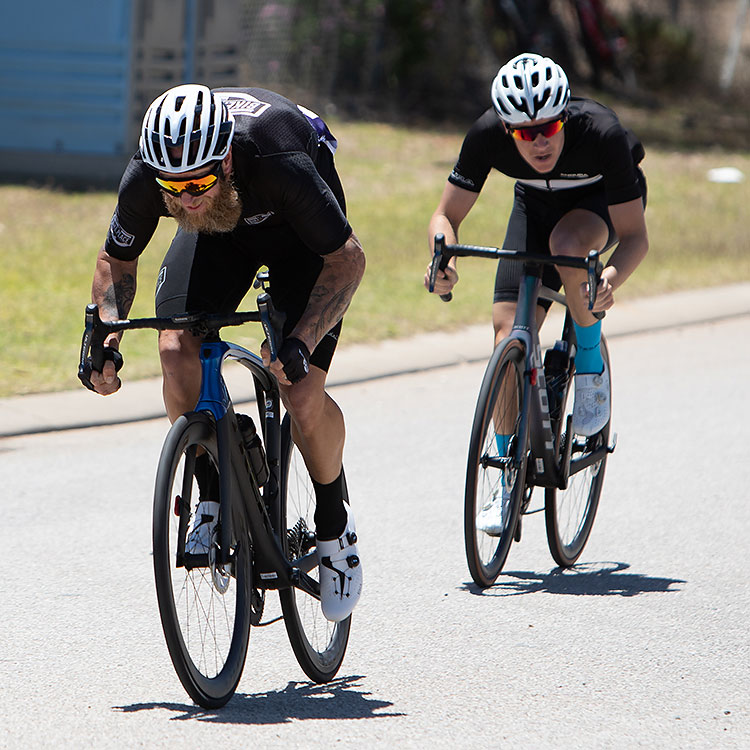