Last Sunday saw the Peel District Cycling Club race at the Pinjarra Industrial Estate criterium circuit for the third and final time this season. As usual the wind played a role in the race as did the heat in later grades. 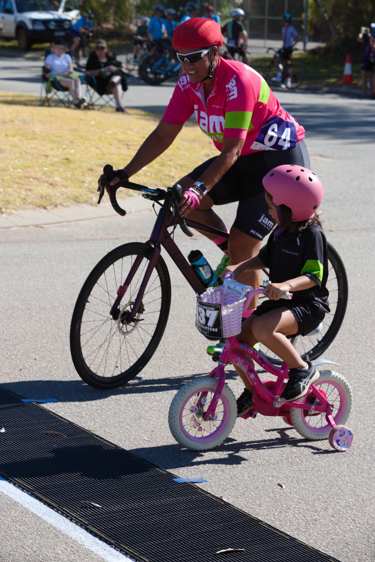 The first grade away was E grade. Kit Boulton took the Fleet Cycles Mandurah prime ( a mid race sprint prize) and rode away to take the solo win. The women’s race was far more interesting Kristeen Hapi, struck out early and established a lead, only to be caught by Gina Moohan. Madeline Kelly in her first race, chased the pair down and went straight past. Moohan reacted, and with one lap to go Kelly had a 5 second advantage over Moohan with Hapi a further 15 seconds back.  The last lap was a flying lap by Moohan, who caught Kelly on the back straight and rode away to take the win. Kelly was second and Hapi third.

The D grade race was almost identical to their last race at Pinjarra, an attack on the prime lap, the attack chased down and the prime won by Callum Campbell. The group stayed together and the bunch sprint was won by Ron McArthur, with Campbell second and Bill Andersen moving up a few places to claim third. The women’s sprint finish was won by Zoe Stolton from Donna Dixon with Kate Prevost third. 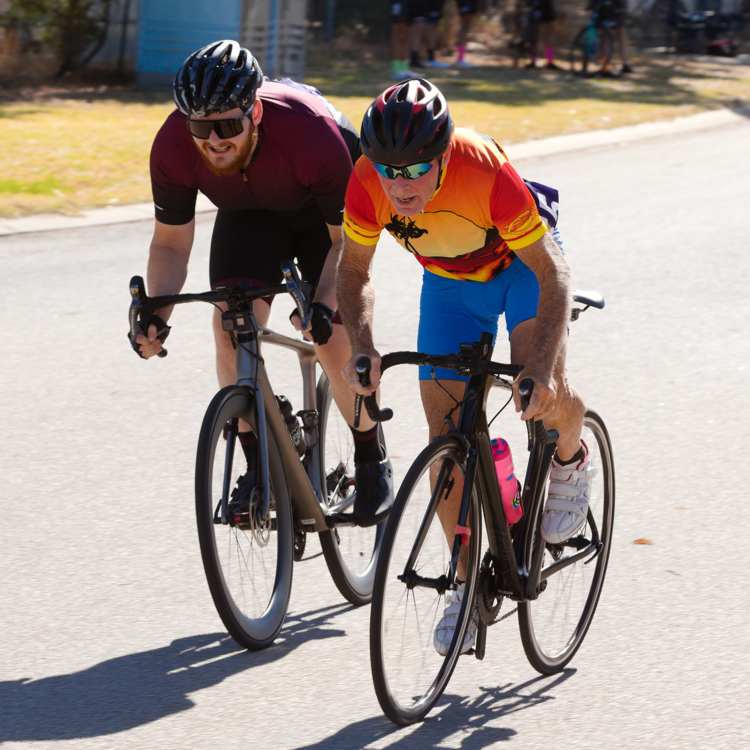 After a frantic first couple of laps in C grade, a break of three riders was established.  While there is no “team” racing, the unwritten rule is you do not chase a rider in the same jersey as you. With more than half the riders in either Fleet Cycles Mandurah or The Bike Place Baldivis kit and one of each in the breakaway. The bunch was not motivated to chase the trio down. Simon Rice riding in a Fleets Cycles jersey kept the Fleet Cycles prime in house. The three way sprint was won by Andrew Crack with Rice second and Peter Ridley third. Jo Boulton was the top women finisher ahead of Dennise Laurence.

B grade has a reputation as a chase down everything race that ends in a bunch sprint, so a couple of Peel District Cycling Club volunteers pooled their resources to arrange a prime every third lap. Which meant a sprint every six minutes in a forty minute plus one lap race. Unfortunately their scheme  was in disarray, when three riders went clear on the second lap and like C grade both of the local bike shops were represented. The gap grew as Ryan Wilmott picked up the first four primes and Michael White the fifth and final prime.  Just before the final prime riders from the bunch started attacking and attempting to bridge. Craig Raynes made a strong solo effort and manage to close the almost 30 second gap to the leaders, catching them at the bell for the final lap. That was as close as Raynes got, a furious last lap saw Wilmott take the win from White, the third member of the breakaway Josh Brown was third and Raynes fourth. 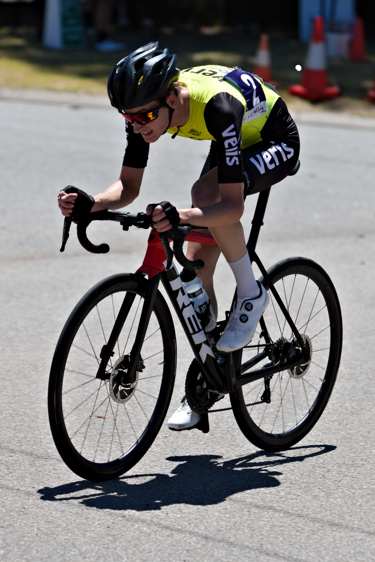 Matthew Connan winner of A grade

A grade started as quickly as B and C, and within two laps a two rider breakaway of Tim Harris and Calum Milne was clear. As heat and bad luck slowly reduced the chasers. It looked like the two were going to stay away, when about halfway through the 45 minutes plus one lap race, Milne slowed and Harris was alone at the head of the race. Matthew Connan, Milne’s team mate at Veris, attacked the chasers and made his way to Milne. The pair slowly closed the gap to Harris. It looked like team mates would work over Harris, then suddenly Connan was off the front, Harris was chasing and Milne was drifting back towards the remaining chasers. After six brutal solo laps in the heat and wind, Connan took the win, Harris was 10 seconds back in second, Milne lost almost a minute, but finished ahead of the chasers in third.