Sunday saw the last race at the Alumina Way circuit for Peel Districts Cycling Club summer criterium season. The circuit is fast becoming a favourite amongst  racers with its’ wide open roads and flowing corners.

E grade stuck together for most of their twenty five minute race, with two laps to go Campbell McDowell attacked and broke up the group. McDowell the current State under 11 Criterium Champion rode away to solo victory. Kristeen Hapi chased all the way for second. Madelaine Kelly was not far away in third.

D grade saw a number of attacks, but they were quickly chased down and in the bunch sprint Callum Campbell earned promotion to C grade with his second win in a row. Glenn Blackwood was second and Samuel Wheelhouse was third. Kate Prevost took top women honours by less than 0.01 second from Zoe Stolton with Tammy Stone third.

The biggest field of the day was C grade, with 35 riders.  After a frantic start, the race did not slow down.  Every lap  the bunch was strung out, usually in single file with gaps appearing between riders. However, the gaps never grew, there was always somebody to close them. While there were a few casualties. There was 28 riders in the bunch at the bell, in the bunch sprint it was Jordan Van Der Togt first, Chris Paterson second and Dylan Muller third. Vicky Fourie took top women honours with Belinda Alcock second and Zoe Clayton third. 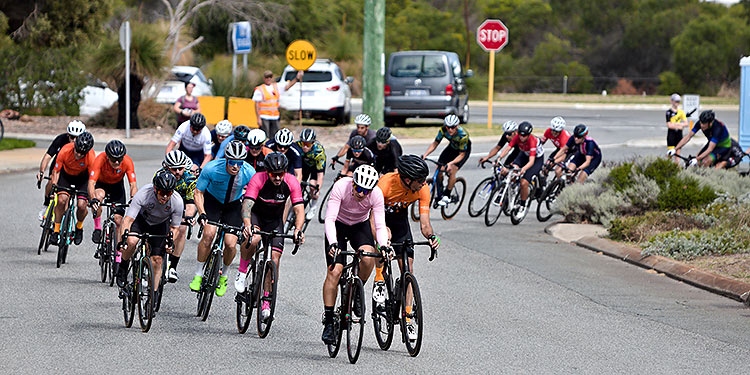 One lap and C grade is spread out

To the casual observer on the finishing straight which was into a headwind, it looked like B grade was slower than C grade. Most laps saw the compact bunch cruise down the straight. However as soon as they hit the first corner the attacks would start and the chase was on, with speeds hitting 50 kilometres an hour.  Then approaching the final turn the bunch would slow as riders looked to conserve energy into the headwind. Unless a rider or riders had managed to get a break, which happen a couple of times and the break only lasted a lap. In the resulting bunch sprint it was Dan Mijat first, Cameron Schmid second and Ben Fairclough third. Isla Carr was the first women finisher, with Rachael Wales second and Dharlia Haines third.

A grade was a very different style of racing. Two riders would establish a break, the bunch would let the gap grow for a couple of laps, before chasing the break down, then the process would repeat. After forty five minutes of racing and half a dozen breaks, the race finished in a bunch sprint that was won by Theo Yates, with Mathew Wardynec second and Logan Calder third.