With the State Track Championships on and riders preparing for the National Road Championships next weekend, the race dynamics were different from the usual at the Peel Districts Cycling Club criterium race at Smeaton Way in Rockingham last Sunday.

This was most noticeable in A grade, with the complete absence of the VeloFit team who had dominated the previous races in the series. Instead there was a large representation from Dome Coffee team. As well as Rockingham local Theo Yates who has spent the last couple of seasons racing the Asian circuit with a couple of team mates from the newly formed Pedal Mafia team and Michael Freiberg the 2019 Australian Road Race Champion. 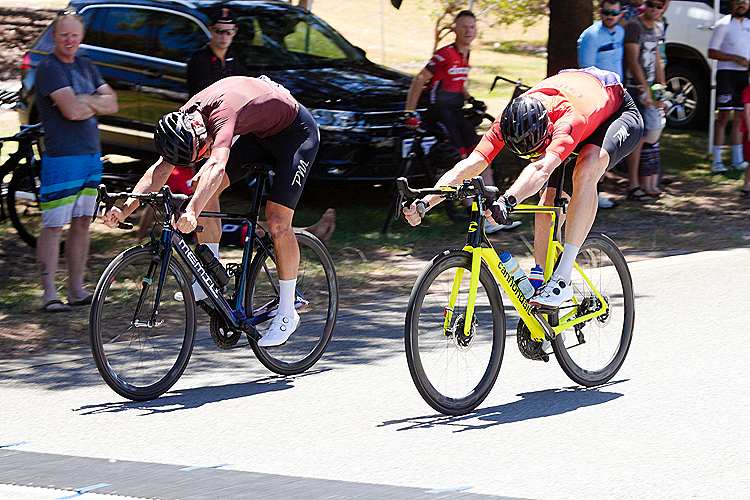 The race started and there were three riders in a break, including Yates. With each of the teams represented it looked this would be break of the day, as over half the riders in the bunch  would not chase.  Then a couple of riders without teams attacked out the bunch and were joined by another Pedal Mafia rider, they trio worked hard and then there was six at the front. Back in the bunch there was a short lull, as the riders expected Dome team to start chasing. After a couple of laps with break getting further up the road. Freiberg made his move, the bunch reacted and five minutes later what looked like a race winning move was no more.

The race now settled into familiar pattern, a rider or two would attack, get a small gap, stay away for one or two laps, get brought back, another attack would go and the process would repeat. For all the brave heroics, it was going to end in bunch sprint.

With 300 metres to go it looked like a race in two between the Dome team sprinter Mathew Wardynec and Yates, then Freiberg came off Yates’ wheel. Freiberg got his wheel in front, then Yates came back, got half a length clear, then Freiberg put in a final effort, but Yates took the win by 0.09 second from Freiberg with Wardynec third. 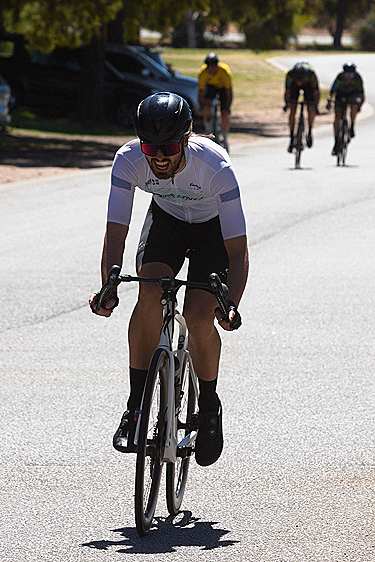 B grade started with a lone rider off the front and the bunch slowly increasing it’s pace to catch them. Once that rider was caught another rider or two attacked, but the bunch never slowed, it just kept getting faster and the attacks were short live. Then with three laps to go, three riders made it off the front and managed hold off the bunch which was still getting faster. Joe Winfield attacked on the final lap to take the win, a couple of seconds ahead of his breakaway companions Ben Fairclough and Doug Stewart who held on for second and third just ahead of the bunch. The top female finishers was Mel Robinson.

C grade was a very different race, at times they were flying along at B grade pace, then with nobody to chase, they would slow to D grade pace.  With a stop start race, there was 31 riders in the bunch contesting the sprint finish, which was won by Dan Mijat, with Daniel Fieldhouse second and Jordan Van Der Toght third. The top three female finishers where Jo Boulton, Dennise Laurence and

With a prime (sprint prize) on offer at then end of the first lap D grade exploded from the start, at the end of the first lap there was five riders at the front, with six riders chasing and everybody else spread around the course. The group at the front did not push on and by the end of the second lap there were eleven riders at the front and that is how it stayed for the rest of the race. In the bunch sprint it was Callum Campbell first, Darren Kemp second and Ron McArthur third. The top female finishers were Sarah Corriea, Kate Prevost and Zoe Stolton.

E grade saw Kit Boulton attack on the first lap and get a gap, behind him three riders worked together to chase. Boulton stayed clear to take the win. Kristeen Hapi attacked her companions on the final lap to take second ahead of Madeline Kelly.