The club ran five seperate grades, based on ability, attracting racers to 11 to 70 and awarding prizes to the top three male and female finishers in each grade.

The first grade away was E grade. Bailey Brown,  Alexander Gardener and Kristeen Hapi left the other riders behind. Hapi was the first to falter, then Brown. Gardener started slowing towards the end of the race and Brown was closing fast. However Gardener held on to take the win, ahead of Brown with Hapi third and first female finisher. Regina Moohan, was the second female finisher and in need of secret training to keep up with her granddaughter Hapi who is getting faster and faster. Cruz Boulton was the third male on the podium.

D grade was punctuated by the attacks of Kate Prevost and Blake Brown. However, their attacks were chased down, and the grade stayed together. One the final lap Brown attacked with half a lap to go and the bunch let him go, until they rounded the final corner onto Smeaton Way and then the fireworks went off. Brown held on for the win by 0.1 second from a fast finishing Zoe Stolton, who was the first female finisher, Nick Cowie was third not far behind. Sarah Correria was the second women finisher, just ahead of Prevost and Peter Washington returning after a two year break was the third male finisher. 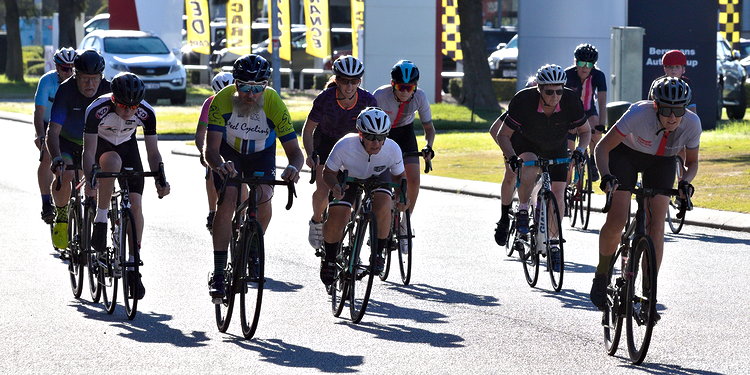 With the largest field of the day C grade was a strange race. With fresh riders constantly on the front, the pace was just fast enough to discourage attacks, but not fast enough to dislodge riders. After 30 minutes without any breaks. Alvin Lim attacked and got a gap, as suddenly nobody wanted to chase. That all changed when they saw the two laps to go sign. They quickly reeled Lim in and then continued to accelerate towards the line. In the bunch sprint it was Daniel Fieldhouse first, Graeme Gardener second and Sam Washington third. The top three female finishers were Jo Boulton, Dennise Laurence and Yael Gardener.

Ten minutes into B grade, a four rider break went up the road, with each of the riders representing a local bike shop team. You would expect the dozen riders left behind to be able to bring them back, except nine of the riders were team mates of the riders up the road and were not going to chase. With four committed riders in the break and a disorganised bunch behind, the lead steadily increased, getting to two minutes after forty minutes of racing. With two laps to go Steve Knight attacked the break, Liam Magowan followed. Adam Jones falter and Josh Brown was caught in no mans land chasing. Two laps later Knight sprinted away to take the win from a tired Magowan who finished second and Josh Brown a little further back third. 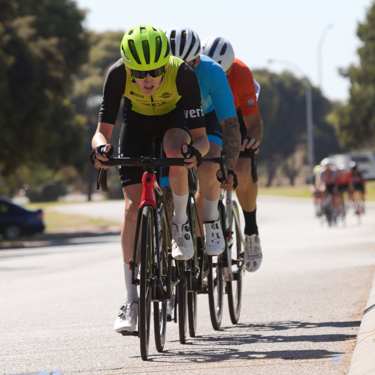 The initial break in A lead by Matthew Connan

With a number of teams of two riders, A grade was a very tactical race. The first break consisted of Matthew Conna, Gary Hansson and Ryan Willmot. All who had team mates in the bunch. This forced the other riders to chase, when they tired, first Joe Laurendi a team mate of Hansson and then Callum Milne a team mate of Connan bridged across to the break. With five riders the break worked together to build their advantage and behind the chasers imploded losing riders and any chance to catch the break.

Next Hansson and Connan attacked and got a gap, forcing Willmot to chase, with Laurendi and Milne sitting on. As Willmot tired Laurendi bridged to the leaders and Hansson attacked. After a couple of chaotic laps, it was Laurendi and Connan at the front, Milne, Hansson and Willmott 15 seconds behind and the chasers slowly closing the gap a further 20 seconds back. The groups and gaps stayed that way until the final lap. Which saw Laurendi attack down the back straight and take a solo win, Connan was second and Milne sprinted out the group to claim third.

The Peel District Cycling Club would like to thank the City of Rockingham for making the Summer Criterium season possible as well as the Winter Road Race season, which starts on 8 May at Dog Hill.