Peel Districts Cycling Club raced on Sunday at the Pinjarra Industrial circuit, the last race before 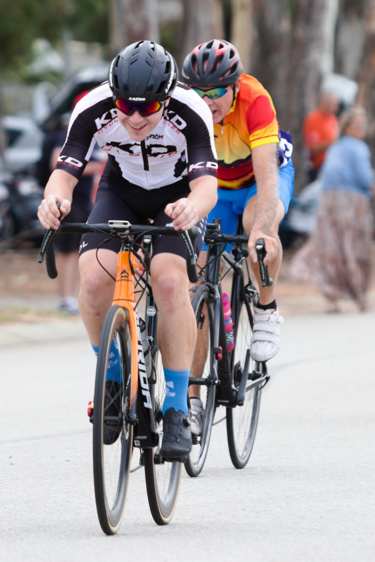 the State Criterium Championships to be held at the Alumina Road circuit in Rockingham on 21 March.

In E grade broke up fairly quickly with Alexander Gardener riding away to take the solo win. He was chased all the way by Emma Smith to claim top women honours. Kristeen Hapi was third overall and second women overall. Xavier Corriea the second male finisher and Gina Moohan was the third women.

D grade start frantically with an attack by Sam Wheelhouse, which split the grade in two. 10 minutes later the bunch was back together, Wheelhouse tried his luck a couple more times, breaking the bunch up, only to see it reform. With a lap to go Wheelhouse attacked again, this he was not caught and took victory. Ron McArthur was second.  Sarah Corriea was the first women home in third, closely followed by Kate Prevost.

The largest grade of the day was C with 20 riders. With a large number of riders willing to chase, the breakaways, last a lap or two before being caught. The final lap saw four riders break free from the bunch and in the run to the line it was Sam Washington first, David Vas second and Rob Ramirez third, Jo Boulton was the first women.

With only a few riders in A and B grade, the grades were combined and no matter what happened there was going to be bruised egos. After a flurry of attacks and counter attacks, a six rider break formed. Containing four of the seven A grade riders, the break  just rode away from the others. Halfway through the race the six became five as B grade’s Craig Raynes was dropped. In the sprint it was Tim Harris first, Joe Laurendi second and Michael Mahoon third. Steve Knight stayed with them all the way to the line to take the B grade win. Raynes riding solo held on for second and Clinton Carlyle took the sprint in the chasing group for third.