Summertime, and the living is easy… 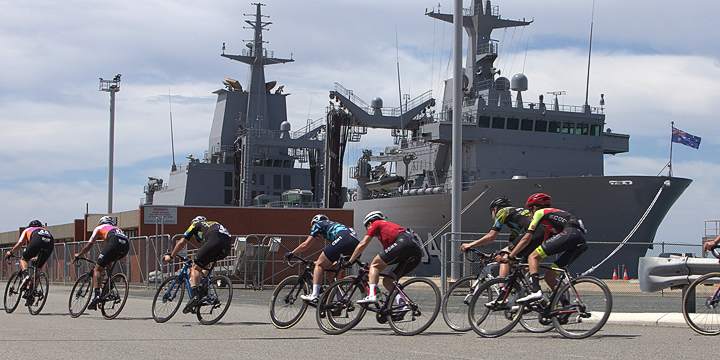 Our summer criterium season started last Sunday at a new course on Garden Island thanks to the Australian Navy. The two kilometre course is fast and flowing, with six corners, racing along the dockside and being exposed to wind made it challenging.

E grade quickly lost riders in the conditions, with Shannon Fitzsimmons driving the pace, there was only three riders together on the final lap. Fitzsimmons opened up the sprint early, only to be passed by Stirling Buchanan on the line, with Hamish McGillivray taking third.

Jean Ferriera attacked on the first lap of D grade, the bunch appear happy to let him dangle off the front at first. He quickly built up a lead and the bunch started chasing, shedding riders along the way. Ferriera stay away from the chasers to claim a win and promotion. Philip Barnes launched out of the bunch on the final lap, to get within 10 seconds of Ferriera and claim second, closely followed by Jordan Watkins. With Scarlet Sibbel the first women finisher, followed by Zoe Stolton and Karri Buchanan.

C grade saw a lot of attacks, but there were more willing chasers. This kept the pace high and consistent throughout the race. In the bunch sprint it was Sam Washington taking the win, with Ricky Pedersen second and Ben Lindsay third. Denise Laurence was the fastest women.

The B grade race  was very similar, occasionally the attackers, would get a small gap, but they would be brought back by a bunch travelling consistently at 42 kilometres an hour. The pace was telling as gaps started opening 35 minutes into a 40 minute race. In the end it was a bunch sprint won by Key Bonser, with Ben Mears second and Matthew Trewick third.

The big difference between A and the other grades, is a break will get away and stay away for most of the race. Today was no different, as Matt Connan, Adam Maccan and Courtland Wood slowly built a lead. Halfway through the 45 minute race the trio had close to 30 second lead, when the bunch started chasing in earnest. With less than 10 minutes left the gap had closed to 15 seconds and Brady Gilmore launched out of the bunch and bridged to the leading group, just as Connan was dropped. The fresh legs of Gilmore revitalised the break and two laps later at the bell for the final lap the trio still had a 12 second lead. Rounding the final corner, for a long down wind sprint the trio had a small gap over the chasers. Steven Hall launched out of the chasers, to cross the line first, but is currently under investigation for a rules infraction. Gilmore was not far behind, just ahead of  Wood.

Ali Milne leads B grade past the HMAS Stalwart